Reflections Beyond the Road – Phyllis Zouzounis

(As told to Marcy Gordon) 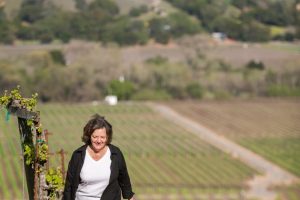 I grew up in San Francisco during the heyday of the counter-culture movement.

I started out wanting to become a nurse but I soon discovered it wasn’t the vocation for me and I moved to Sonoma County. My partner at the time saw an opportunity in the jewelry business so we opened a store in Coddingtown Mall. It was then that I began to join some local wine tasting groups and we also started going to a place in Calistoga for tastings. We were just kids hungry for information, hanging out tasting and talking about wine. I never thought it would become a profession.

The tasting group was filled with people who subsequently got involved in the business and became the heavy hitters of wine, like Helen Turley.

It was a crazy time; the wine industry we know today was just beginning. 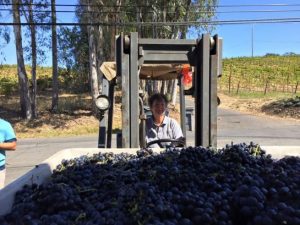 One day we were drinking a 1978 Dry Creek Vineyards Chardonnay and we decided, “Hey, lets go find this place.” So we took a day trip out to Dry Creek Valley. It was a trip in many aspects of the word and I just fell in love with the valley.

Eventually I landed a job as a cellar rat at Dry Creek Vineyards. At first the winemaker did not want a woman in the cellar but I persevered and began to learn the ropes and make wine. I was propelled by a deep interest in wine but not knowing what the obstacles were was almost an advantage.

I was usually the sole woman at the wineries where I worked and it was always a struggle. 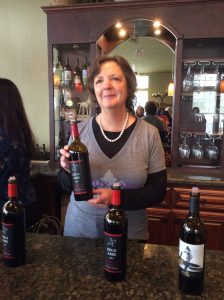 As I got more knowledgeable I began to speak up more and ask more questions, and it turns out have a very good palate and a great memory and ability to recall wines I’ve tasted from around the world. It’s like having a wine catalog in my head that comes in very handy.

Then I started making wine in my basement with other people in the business with grapes we picked ourselves. I like the protocols of winemaking and the mysteries. You never know what you’re going to get exactly.

Back in the early days there weren’t many women in wine, but I had good mentors and role models along the way like Merry Edwards and Zelma Long, these women showed me that I could have a place in the world of wine. Now I’m considered a pioneer, but I’m always amazed I am considered in the same company and mentioned in the same breath as my idols and mentors. To be included as one of the women trailblazers of wine is a great honor, but at the same time I feel like a kid in a candy store filled with awe and wonder.

It’s been a long journey floating along this river of life in wine.

Navigating obstacles and managing the ups and downs, but it’s what I love and what I know best and that’s why I do it. I’ve never felt anything was not possible. I’m not a planner; I just followed what was fun and interesting.

Constant learning is what keeps it stimulating and fascinating.

In my heart of hearts, I suppose my secret desire was to be a singer. A great singer connects with people no matter the genre, be it opera or county or rock. I’ve always admired the ability, via words and phrasing that allow singers to make a deep emotional connection that is everlasting. People that sing can get a story across with their voice alone. I think perhaps my wine can do that too, albeit to a smaller audience.

I just started on a voyage and this is where my boat took me.

In San Francisco, 1967 was known as the Summer of Love. But for me, it was also the summer of possibilities. I never decided I was going to be in the wine industry. 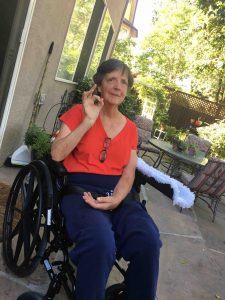 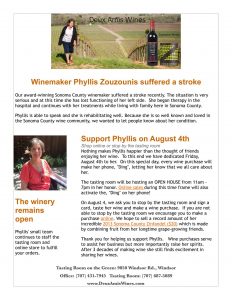 Our award-winning Sonoma County winemaker suffered a stroke early June 2017. At this time she has lost functioning of her left side.  She began therapy in the hospital and continues with her treatments while living with family in Sonoma County.

Phyllis is able to speak and she is rehabilitating well.  Because she is so well known and loved in the Sonoma County wine community, we wanted to let people know about her condition.

Nothing makes Phyllis happier than the thought of friends enjoying her wine. To this end we have dedicated Friday, August 4th to her. On this special day, every wine purchase will make her phone, “Ding”, letting her know that we all care about her. The tasting room will be hosting an OPEN HOUSE from 11am – 7pm in her honor. Online sales during this time frame will also activate the, “Ding” on her phone!

Thank you for helping us support Phyllis. Wine purchases serve to assist her business but more importantly raise her spirits. After three decades of making wine she still finds excitement in sharing her wines.